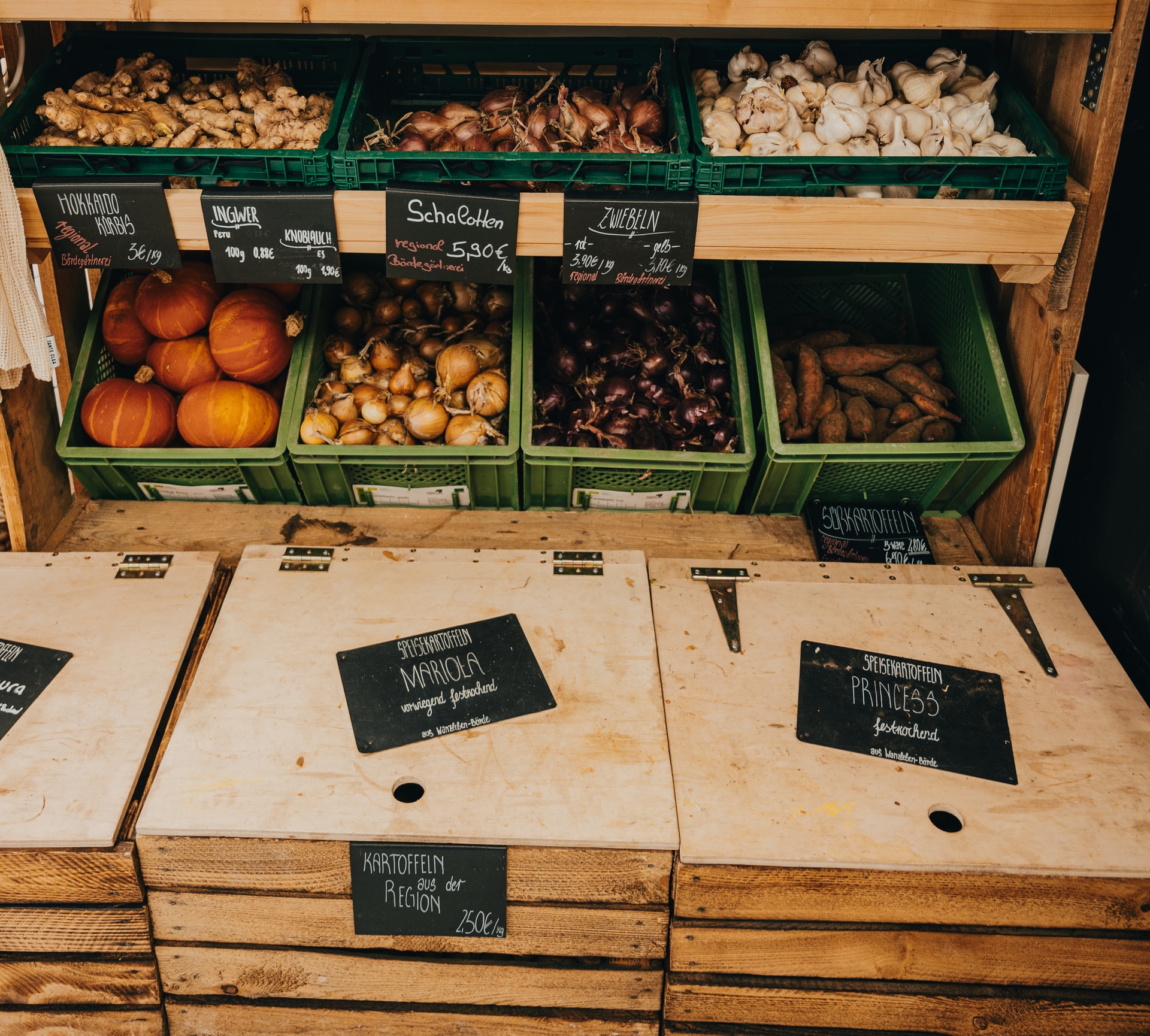 This article gives a glimpse of the supermarket audit we conducted in budget and mainstream supermarkets in Norway, Italy, Germany, Poland and the UK, and the questions it raised. The audit looked at genetic agrobiodiversity in terms of the range of varieties/species available in key foods (given in fig. 2). It also considered how many products were certified by biodiversity-enhancing schemes as a rough indication of production impacts on ecosystem biodiversity.

RANGE OF VARIETIES AND SPECIES AVAILABLE TO CONSUMERS

The publicly available information about varieties was limited in stores, routinely provided on some produce types and impossible to find on the labelling of others. Tomato and apple varieties were typically labelled (as mandated by EU law), as were potatoes in most cases, but breed/variety was very rarely mentioned on other crops and animal products surveyed. For instance, cabbages were often marketed according to certain types, but it was unclear whether these types were varieties. Hispi cabbage is marketed as ‘sweetheart cabbage’ in the UK and Germany (also ‘pointed cabbage’, or ‘oxheart cabbage’) and seems to be a variety, whereas ‘red’ and ‘white’ cabbages seem to refer to certain traits encompassing several varieties.

In this context, where it isn’t possible to tell which variety a lot of products are, and most of those which do mention it don’t do so obviously (often hidden in small letters by the use-by date), a few breakthrough varieties have gained huge popularity and are proudly advertised as indicators of premium products. For instance, ‘Angus’ varieties of beef (Aberdeen or Black) were singled out as markers of quality in all 5 countries – most of which mentioned no other variety information on any of their other beef steaks or mince (only 22 of 461 beef product lines audited made any mention of the breed of cow they came from).

There are also some foods for which variety has become a key feature, with shoppers making purchasing decisions according to famous varieties which have become household names. The flip-side of this is that varieties are less substitutable and few recognisable varieties come to dominate the marketplace. For instance, apples are frequently advertised and bought based on known varieties, and only 6 international varieties made up almost 70% of product lines across stores. Gala apples and Gala ‘mutants’ alone accounted for 1 in 5 of all the apple lines available. Compare this with tomatoes, advertised mainly by type/characteristic rather than particular varieties, for which the variety accounting for most lines (‘Tomimaru’) counted for only 7% of all the fresh tomato product types sold (and all in one country).

Our analysis will eventually include all biodiversity-relevant certifications, but just focusing on Organic certification initially as an indicator of farming with a more positive impact on surrounding biodiversity (Smith et al., 2011), we found wide variation in the proportion of products certified Organic between products and countries. Based on our initial scoping, both the budget and mainstream supermarkets in Germany stocked a relatively high proportion of Organic lines, whereas in the UK and Italy Organic was much more linked to supermarket type – with little to no breakthrough to the budget supermarkets at all.

There were also large differences in terms of which product we looked at – with almost 20% of the surveyed options for buying eggs being Organic, but less than 3% of those for beef and bread (even in massive stores there were often no options mentioning sustainability at all). Why is this the case? Is it relatively easier to produce Organic eggs than Organic beef? Is it about smaller price differences or greater willingness to pay for certain goods based on ideas of Organic production being more important for them?

This stage of the research intentionally raises more questions than it answers. Why are Organic options so uneven between product types (and countries?)? What are the stories behind which varieties make it in supermarket supply chains, and why? How are these linked to impacts on agrobiodiversity and the broader environment? These are the questions this task raises and to which we will turn in the next stage of our supply chain work, conducting interviews with key stakeholders in supply chains across Europe.